“A Brief Introduction to Societal Collapse”

‘The Collapse of Complex Societies’ by Joseph Tainter is one of the most important books on this subject. It’s an incredibly well-researched study of various societal collapses throughout history. Tainter develops a model of collapse via seventeen examples, then applies the model to three case studies: The Western Roman Empire, the Mayan civilization of Mesoamerica, and the Chaco culture of North America.

‘Societal collapse’ is generally understood to mean “society becomes very shitty” but Tainter provides the technical definition of ‘collapse = a massive reduction in the complexity of a society’ (not quoted verbatim).

A ‘complex system’ can be loosely defined as ‘a system that consists of multiple interdependent parts or subsystems that interact in a non-simple way.’ Note the operative word: Non-simple. A wristwatch has multiple interacting parts, but operates in a simple manner to perform a simple task.

According to Tainter’s model, a society increases in…

The World Crisis is about the death of the West, and the ascent of the World Government, and they’ve got it worked out A to Z.

In the first place, I owe an apology to Keith Woods for only posting this enjoyable conversation now.

Keith’s doing a great job. Connecting loads of young guys to the real Populist Tradition, away from the kosher variants that parade as ‘the opposition’ everywhere. And which obviously very much centers around ‘The Third Way’, which simply is the Path.

Away from Capitalism, from Usury, from exploitation by Capital, International Finance, the parasitism of the rich. And which is not solved with Communism, which simply consolidates the Capitalist Cartel in the State. But by monetary and land reform, aimed at decentralized ownership by the producing men. The end of parasitism.

He’s here on Twitter, and this is the video of the interview.

“It has always been about locking people up and acquiring a tool for an insane Tyranny against any popular uprising.”

Left: We went back to sleep. And now we will pay.

The World Crisis started September 2019, with the restart of Quantitative Easing by the Fed. It signaled the return of the 2008 Credit Crunch. Nothing was solved in 2008, only postponed, and now we face a Reckoning that can only be compared to the Fall of Rome, or even better: the Bronze Age Collapse.

Babylon is Usury. The Financial System. The (Central) Banks. They rule, not ‘politicians’. The World Financial Crisis, the coming Gold Standard, and the destruction of America and the West it will bring, are the final stepping stone to their World Conquest.

In September 2008, during the Lehman Collapse, Hank Paulson went to Congress and demanded a closed door meeting. He told them: “you must give us $700 Billion, or the financial system will melt down, no more money will come out of ATMs, people won’t…

“Trump’s signing the USMCA … will probably become his enduring legacy.  He will be ‘The US President That Signed Off America’ to be run by the UN/globalist community steered most largely in America by the clandesant deep state managers at the Council on Foreign Relations in lockstep with their UN/globalist comrades.” — Rich Loudenback

How do bailouts and corporate nationalization, (the merger between a government and corporate entities) fit into a “free society?” @GregMannarino

“Seeking always to reject misunderstandings while promoting cooperation and concord. Freedom of religion and freedom of expression, when truly guaranteed to each person, will help friendship to flourish and thus become an eloquent sign of peace.”

We
are alarmed that the Supreme Court has allowed a 40-foot memorial
cross to remain on government property in Maryland. As Justice
Ginsburg wrote in dissent, ‘the principal symbol of Christianity
around the world should not look over public thoroughfares,
suggesting official recognition of that religion’s
paramountcy.’

This decision unfortunately undermines
well-established precedents safeguarding the separation of church and
state. While religious symbols like this cross and other war
memorials maintained on public land may be ‘rooted in history and
tradition’ and not perceived as coercive, that should not be the
determining principle as to whether they are constitutional. And the
Court’s effort to distinguish between crosses that have been in
place for a long time and ones that might be erected on government
property in the future fails to address the serious concern we have

The Omission of the Jewish-Masonic question. 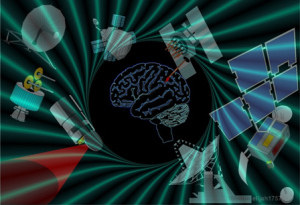 AN INVISIBLE ENEMY
Thanks for the critically important information, Lisa. One thing that is important for Christians to consider is the analogy of the last plague that came upon Egypt in relation to the Exodus. There was only one thing that protected the Israelites and that was the blood of a spotless lamb ‘struck’ upon the lentil and doorpost of their homes. The only thing that will protect people from this spiritual death in these last days is the Blood of the Lamb, Jesus Christ.

Does the Bible speak of an INVISIBLE ENEMY that will not ‘hurt’ anything but those who do not have the seal of God?

Rev 9:4 “And it was commanded them that they should not hurt the grass of the earth, neither any green thing, neither any tree…